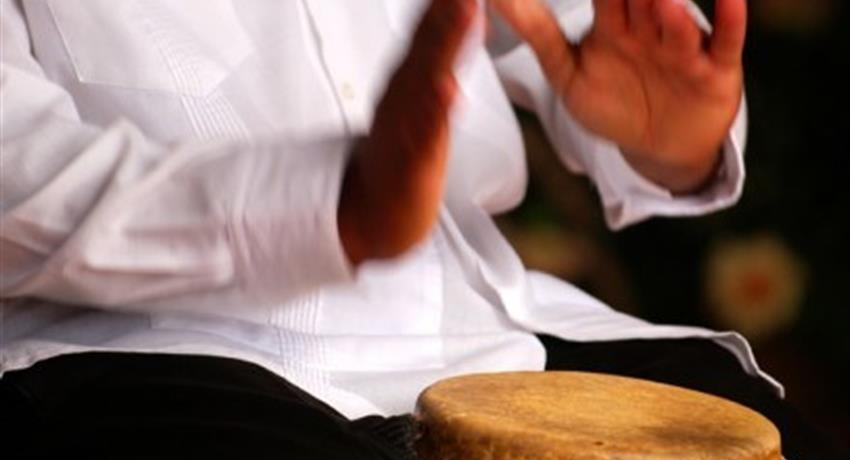 Observe how the salt is extracted from the Pacific Ocean using the same technique the indigenous invented long time before the Spanish arrived to the Americas; learn why the village of La Arena is famous for its pottery and see how hard it is to use the potter’s wheel; visit a traditional sugar cane mill to see how the refreshing sugar cane juice called “Guarapo” is made and how sugar cane honey is cooked; and finally know how the local bread, called “Pan de La Arena”, is baked in clay ovens and how it obtains its unique taste.

At noon, taste a delicious traditional Panamanian lunch in a local restaurant. Considered by many “the cultural heart of Panama”, the inhabitants of the Azuero Peninsula live their traditions and their folklore proudly which is visible in their daily lives. In the afternoon you will see in detail the handcrafting of the Pollera, one of the most beautiful traditional costumes in the world, by visiting a group of ladies devoted to the traditional dress of the Panamanian women. You will also visit two studios of local artisans dedicated to Panama’s Folklore: A maker of the fearful devil’s masks used for the folkloric dances of the Dirty Devils and Clean Devils; and a drum maker that hand makes traditional wooden drums that are part of Panama’s traditional music.

The Herrera Province is very famous for its “Pan de La Arena” – Arena Bread, a special type of bread baked in the community of La Arena. The bread is baked in wood-fired clay stoves which gives it an excellent taste – especially when consumed right out of the oven. Many travelers coming through La Arena will always stop at one of the traditional bakeries to buy fresh bread – best enjoyed with local white cheese and a hot cup of coffee.

The village of La Arena is also very famous for its tradition in Pottery. Clay is extracted from several places on the Azuero Peninsula and after drying it in the sun and mixing it with water twice, the raw material is taken to the potter’s wheel where skillful artisans shape jars, vases and many other forms of pottery. After shaping the pieces, they are dried in the sun for several hours before being baked in wood-fired clay stoves and finally painted with colorful designs.

The extraction of Salt from the Pacific Ocean has been practiced in the region long before the Spanish arrived to the Americas. In the chronicles both Andagoya and Espinosa write about huge salt deposits the different indigenous chiefs had when they arrived to Azuero. Today, the process of extracting salt from the ocean is still the same as it was hundreds of years ago: during high tide seawater is led through channels into shallow pools. The water remains in these pools up to 15 days while it evaporates little by little, leaving behind large salt crystals. The salt is then extracted by skillful salt workers with special instruments, always avoiding mixing the salt with dirt to maintain its purity.

Sugarcane was brought to Panama from the Caribbean islands by the Spanish during the conquista. Especially in the Herrera Province, sugarcane has ever since become the most important crop for the local economy. Sugarcane is processed artisanally – it is grown during Panamanian winter (May – November) and harvested in summer (December – April). Once it is cut, its juice – called Guarapo – is extracted. The juice is then being processed into sugarcane honey used to sweeten coffee or pastery.

Lunch will be served at a “Fonda”, a local restaurant where you will be able to taste traditional snacks and dishes from the Azuero Peninsula such as Lechona (Panamanian style suckling pig), Torrejitas de Maíz (fresh corn fritter), Carimañolas (yucca roll stuffed with beef) or Tamales (corn dough with pork or chicken, wrapped in banana leaves and cooked for hours).

One of the most eye-catching accessory of Panama’s folklore are the colorful Devils’ Masks. The character of the devil has been introduced in Panama by the catholic church in order to make the indigenous population which didn’t speak Spanish understand the message of catholicism with dramatizations and mimics. In today’s folklore there are different types of devils, the most popular in Azuero being the “Diablico Sucio” – the dirty devil. His dress is red and black striped and he always wears a fearful mask. The mask is made out of papier-maché and shaped on a mold of clay. After several layers of paper, the mold is removed and the mask laid out in the sun to dry. It is then painted with different colors and decorated with several accessories in order to obtain the final mask.

Drums – Tambores – are one of Panama’s national symbols and an instrument used in traditional music of Panama’s three main ethnics – the indigenous, the black, and the hispanic. To build a set of drums a lot of experience is required in order to chose the right type of wood and leather to produce the unique sound of the Tambor. The wood has to be cut into the right size and shape before being moistened, put together and dried in the shade. For the best sound, traditionally leather of deer, goat or wild pork was used, however, as most of those animals are protected, mostly cow leather is used.

Panama’s stunning national dress is called Pollera. There are many different types of Polleras, from simple colorful skirts up to the handcrafted and beautifully embroidered “Pollera de Gala” which is considered one of the world’s most beautiful national costumes. Panama’s Pollera originates from a Spanish dress from the 16th or 17th century – but much simpler than today’s version of the Pollera. Panamenian women wear their Pollera usually for festive events and celebrations and combine the stunning dress with ostentatious gold jewellery and detailed hair accessories, called Tembleques.

In combination with the Pollera, Panamanian women always wear Tembleques, an outstanding hair accessory. They are called “Tembleques” because they are made out of flexible materials which move when the women make a movement while walking or dancing. Originally the Panamanian women used natural flowers in their hair, nowadays the Tembleques are made of fish scales, wires, pearls and crystals and always come in shapes of flowers such as roses, orchids and others or animals such as butterflies, hummingbirds, peacocks and others.